"I just don't understand how people would spend so much on sewing machines, then use cheap inferior feet!"

Said K, somewhat exasperated. "If only they knew the risks."

"Risks? There are risks?" I asked.

This was how it all began.

During a conversation with our supplier - for his privacy, let's just call him K. Let's wind back slightly, to the start....

"So, your competitor is quoting me X dollars for the same item. Can you match it?" I asked innocently. As any business owner would.

"Well, actually, they are not the same item at all - because the quality is totally different. We don't compromise on quality, but I can't speak for others..."


That was when he brought up the issue with inferior quality and risks.


It was much more than "foot doesn't fit". And I was all ears.

"My grandfather has a belief: quality might seem pricey, but cutting corners to save a dollar will cost everyone dearly. Especially for the consumers." He said.

He went on to explain that his factory have been making parts and feet for Janome Japan for three generations. This is their family business. His Japan-trained grandfather brought back all the knowledge when he set up the factory, satisfying the tough quality requirements that Janome Japan is known for.

That's how they come to be known by all insider for being the most quality-conscious, while their competitors became well-known for lowest prices.   "And don't just take my words for it. Come to Taiwan. You are more than welcome to visit us at the factory and you'll see."

That, was my invitation.

Months later we made the trip over, after working with him for what seems like a whole decade. It was great to finally meet K in person and we just picked up our conversation from where we left off. As easy as that.

The factory was smaller than I expected.

And a great deal cooler than outside. It was early in the day and a scooter pulled up in the front courtyard - an elderly farmer arrived with bags of lush looking leafy vegetables. "Lunch ingredients." K said, while showing us into the production area.

We walk through interconnected rooms and each one held different equipment. Most unfamiliar to me because these were metal work machines (as opposed to textile related machines, which I knew well).

Most of these machines looked heavy duty - some drill, some cut, others for moulding and polishing. They looked well-worn but kept in spotless conditions. And there were shelves of dies and moulds in the thousands.

There were only one or two people in each room, busy with their task at hand. With solemn looks of concentration. A few looked up and smiled shyly as we leaned closer to see what they were working on.

"Everyone you see here have been with us for decades..."

K continued. "Some even started during my grandfather's time. And I would probably call them Uncle and Aunty. They've honed their skills right here and they are paid fairly. When they're happy they stay, and pass on their skills to the next generation. That's how we roll and we just want to make really good feet - in the same way my grandfather would have." (these are actual photos taken at the factory)

K went on to explained the steps involved in producing each foot. I took on the information with nods, all the while thinking to myself: "wow, this is not how I pictured it..."

You see, I was thinking of massive Bunnings warehouse style building, with conveyance belts and sea of people doing mindless process work. How wrong was I.

Instead, what unfolded before me resembled a jeweller's workshop. In fact, the procedure isn't much different from that of a jeweller's.


To create a presser foot from scratch the engineer would generate a 3D design from his CAD and a prototype would be made - this was then tested on sewing machines and put to work until the design was perfect, and only then a master mould would be created.

From this mould the metal or resin component of the foot would be cast, and the plastic components extruded or stamped. Then holes drilled and rivets applied. These components were cleaned, polished, plated, hand finished, then assembled. Now it looks like a presser foot, but it's not done yet. The most important part only just began.

By this time, the Quality Assurance team got busy (and I didn't take a photo, so this image gives you an idea of what it looks like, without the lab coats)

There would be a list of comprehensive points they go through with checking each foot.

Often the ones they rejected are perfectly functional, except the finishing or plating wasn't perfect. The feet that didn't make the final test were collected and sent back to be re-melted for the next batch. Nothing went to waste.

Then to the packing area. A few ladies with nimble fingers were folding boxes and sticking labels (I also didn't take a photo, but this looks a lot like it - with fewer people and smaller room)


Many brands were visible here. Janome, Brother, Pfaff. And mine.

K explained the importance of this step - the order that was placed by their clients need to be packed into their corresponding brands. No mix up. And out they go.

"So, the making of presser feet is still largely hand-made then?" I asked.

"Pretty much. You can automate it to a point, but where precision and accuracy matters, nothing beats the proper way - which is the way we do things."

This is the exact work ethic you need, to become (and remain) an official partner of Janome.

"Then how do others do it so cheaply?" This was my burning question.

"Maybe they pay their workers less to begin with. I'm not sure." K shrugged and continued....

"But this I do know for sure - they save at the raw material stage, by substituting with cheaper metals, plastic etc. The end product looks exactly the same to the untrained eyes, but to the fellow manufacturer like us, the difference is like night and day." He went on...

"And there are also steps they can skip in the finishing, which means they will need to loosen up at the QA stage, or just not having QA at all." He said while rolling eyes.

"What does this mean to the consumers?"

I mean, when the foot actually goes on the machine, would they be able to tell the difference?" Another burning question that's been bugging me.

"Maybe not at first, assuming the holes are drilled at the right places. And that's because the imitators do without having an engineer on site with CAD. And instead of making a prototype, they simply buy the foot they want to copy from, then just make a mould from this foot. It's like photocopying from a photocopy!" He continues.

"Even if the foot fits, the balance may still be out. And while this may do the job, your sewing machine would be under greater stress, which caused more wear and tear. Just like poorly fitted parts for a car." Said K.

And I could see his point. He went on... "Don't forget the cheaper material, and rougher finishing. This means the foot itself isn't going to last as long. The surface may be tarnished or rusted over time, and that means it will damage the fabrics too."

Wow. Damaged fabrics. Extra wear and tear on the machine.

Not what I want for my customers. And I wonder how many people might be exposed to these, completely unaware.... It was supposed to be autumn but the summer heat lingered. We drove through the city and the scenery changed.

Now I could see the distanced mountains and the foreground is a patchwork of rice paddies, alternating with small warehouses and homes. Nothing over two or three stories high, and there was not a single straight road. Occasionally we'd drive through clusters of single fronted shops and food vendors. As we drove off along the rice paddies and temples, I reflected on all that I've learnt, and pondered on how lucky to have found such quality-focus supplier.

And how easily anyone could have been duped, by simply going for the lowest prices without asking questions.

This is why I'm sharing this story today, because what I've witness behind the scene matters to us all.

Food for thought, for sure....

Until next time, Happy Sewing!

You'll find heaps of useful (yet non-boring) information to actually help you sew easier (with less unpicking) - no matter where you are in your sewing journey :-) 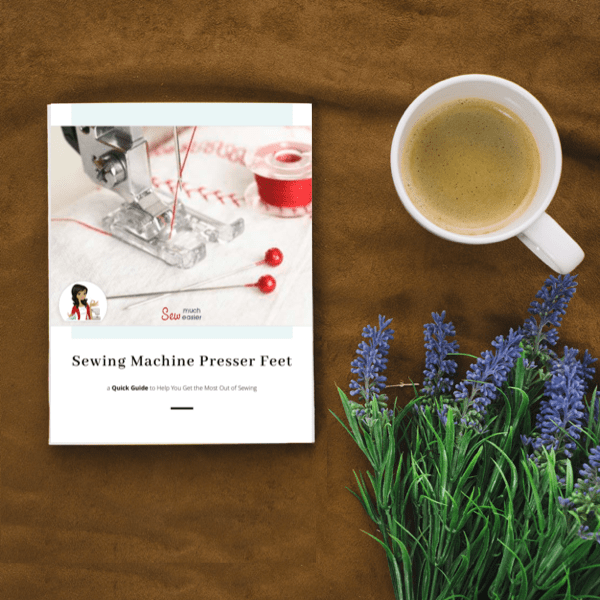 Ok, you convinced me.. I'm off to look at your website for a 'proper' 1/4" foot for my Janome as I really, really need one!

I can definitely confirm this, after my experience.

I purchased a 'cheap' (very cheap) 'walking foot' online for my janome machine.

At first it seemed to work fine BUT I realised it was sewing 'off centre'..... then while quilting aroung the edge of a lovely quilt, it began to break down and jump about 3 to 4 stitches to one side, then back again, and put a grey mark on the fabric, which I think was the metal actually grinding down.

I have a proper foot now - and what a difference! Never again will I stray!

Thank you for that information, I found it very interesting and so good to know that there are places out there that really care.

What a fantastic blog! Im going to share this with a few sewing page in am on !!